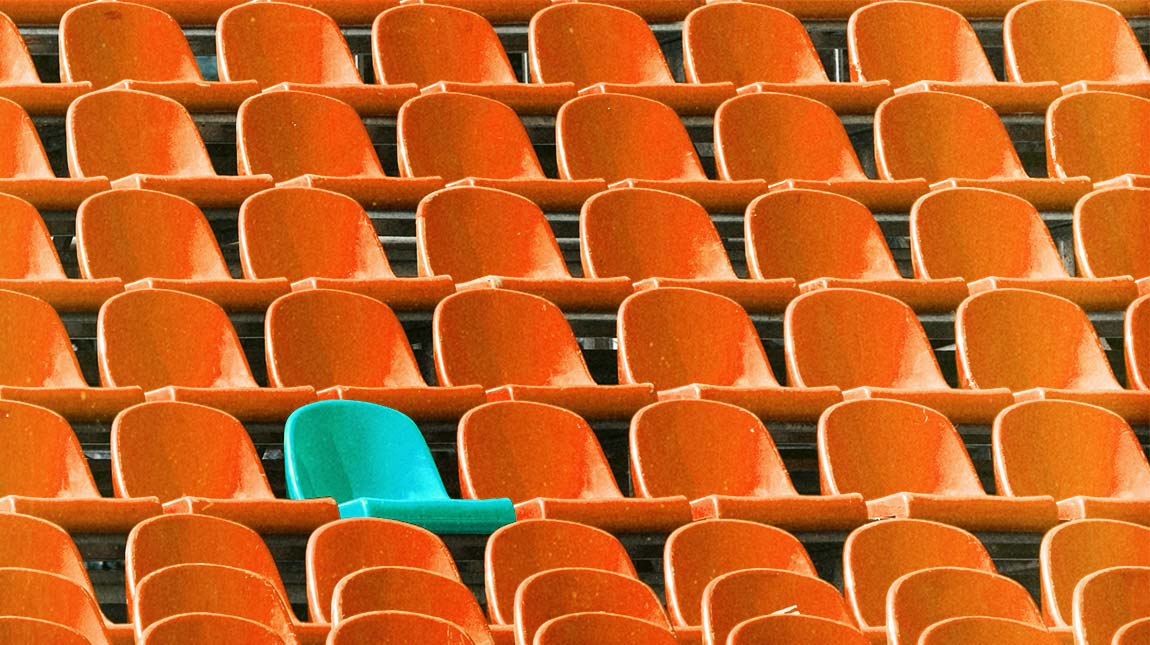 Imagine you and four friends have entered a contest. The four of you are standing on the field of a huge stadium and you’re told that a paper star has been taped underneath one of the 100,000 seats. If the four of you can find this star in the allotted time you’ll win one million dollars. How would you go about the task?

Sadly, this is how many ministries operate. If your evangelism on campus is primarily focused on approaching people at random you are essentially checking under one chair and running to another section. A much more strategic and effective approach would be to have each teammate focus on a particular area and check every chair in their assigned section.When faced with daunting numbers, deliberate and systematic approaches make the problem tangible and achievable.

God has asked each of us to participate in the Great Commission where the prize is infinitely greater than one million dollars. On your campus the prize is each person having the opportunity to know that, if they chose to, they could be in a relationship with God.

Since the end goal is so significant, it makes sense to go about it strategically rather than in a haphazard or random way. That’s where Target Areas come in.

What is a Target Area?

A Target Area is simply a smaller part of the whole. It is an identifiable and quantifiable group of people brought together by one of three things:

What Does It Mean To Reach A Target Area?

The most daunting thing about checking under every chair in a football stadium is the inevitable thigh burn. But the thought of sharing the Gospel with every single person in a particular Target Area seems downright unrealistic and exhausting.

That’s why reaching a Target Area doesn’t mean that every individual has heard a clear presentation of the Gospel. While I’m sure we would both be very happy if this were the case, the reality is that not everyone will be interested in hearing about Christ during their college years. It would be a breach of boundaries to continue the conversation with someone who is clearly saying ‘no’.

Reaching a Target Area actually means that you’ve given each person 3-5 opportunities to hear about Christ throughout the school year. This doesn’t mean they’re hearing the Gospel 3-5 times, but rather, that they have 3-5 chances to be in a position to hear the Gospel.

These opportunities can take many different forms.For example, you could put up posters in your Target Area inviting everyone to a campus-wide evangelistic event. Most people will see the poster so it counts as one opportunity!

Every Fall my team distributes a brief spiritual interest survey to students in our Target Areas and follows up face-to-face with those who indicate interest. That’s another opportunity!

You could make everyone in your Target Area aware of an evangelistic website. That’s already three opportunities!

Let’s not stop there though. What if you trusted Christ to get face-to-face with 50% of the people in your Target Area in order to share the Gospel? Now imagine if even 2% of those people joined you in the course of the year to see that target area reached. If your target area is 300 people, then that’s 6 other people by year’s end who are in it with you. Suddenly what seemed way beyond you is now quite feasible because God has provided more laborers.

While there is no hard and fast rule for the size of a target area, it must be big enough to require a faith stretch on your part, and it must require the 2% who will eventually labor with you to see the job completed.

Reaching a campus through the strategy of Target Areas has many advantages over random evangelism. Here are two at the top of the list:

You have a presence

More than once I have sat in a dorm room with a girl only to be introduced to her roommates and other friends. Sharing my faith with someone randomly on campus doesn’t allow for this. It only happens when I develop a presence on their turf where they have relationships and feel comfortable.

You can track your progress

This will require more creativity as dorms become more and more restricted. Other Target Areas will be easier such as a sports team for which you can simply get a roster.

It’s very likely that as you’re sharing the Gospel with people in your target area you’ll meet some that are already Christians and others who want to begin a relationship with Him. You will undoubtedly become close to these believers who want to grow. As you begin to invest in their lives it’s easy to forget the rest of your task. Many people have gathered a small group only to lose sight of their original goal and stop reaching their Target Area.

Think of it like a Venn diagram. You remember those, right? Leading your small group is a subset of reaching your Target Area. The 2% that will join you in reaching the Target Area will come from this group. Enjoy building into these believers but don’t forget the overall goal. It is unlikely that anyone else besides you is thinking about getting the message of Jesus in front of the people in your Target Area, especially as the school year wears on.

We know that in God’s economy nothing is ever random. Philip’s “random” encounter with the Ethiopian eunuch is a great example (Acts 8:26-40). But in light of the importance of the Great Commission it makes sense to approach your campus with strategic intentionality. It makes sense to have someone check under every chair in a given section and not just one.

I’m sure you would love to see each and every pocket of your campus touched by the Gospel and with this type of intentionality you eventually can.