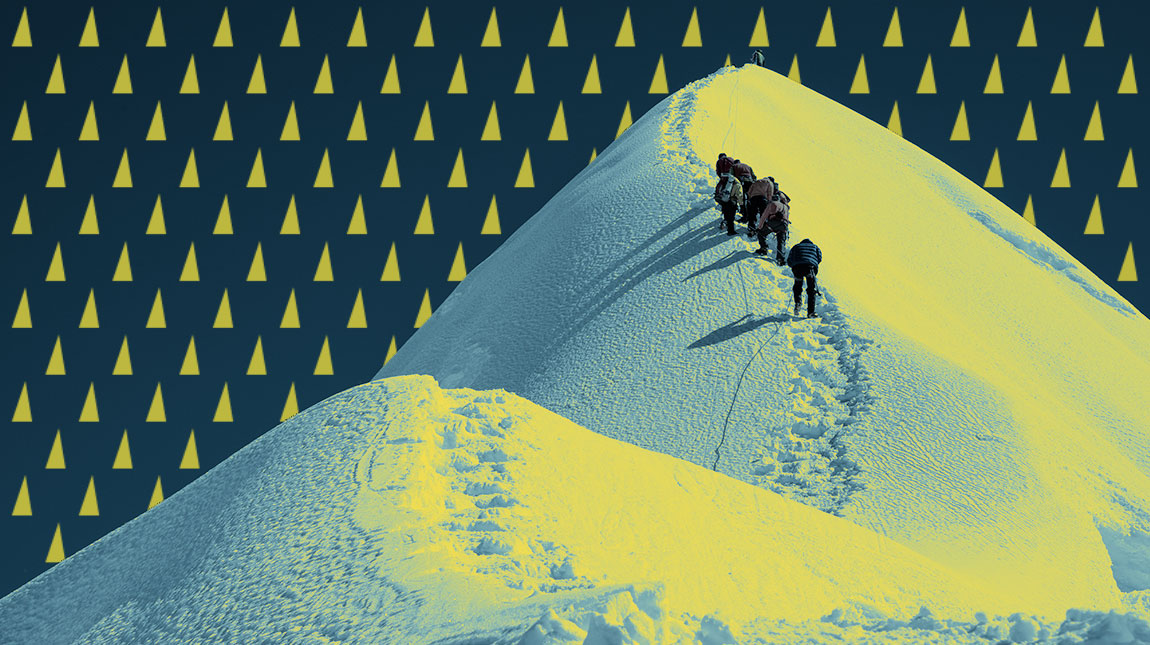 I remember the first mountain I ever climbed. It was about 12,000 feet high and there was an amazing lake close to the top.

Despite the full day of hiking to the summit, it was worth all the work and effort to see that view and enjoy being there!

I have often thought of what it would be like to climb Mt. Everest—both the challenge and the privilege to climb it when so few actually make it to the summit. Most Everest climbers actually don’t ever make it past the base camp.

In English we have a word for this—mediocrity. Let me explain.

I often think of how many Christian college students are satisfied with mediocrity in their faith—that is, with settling for halfway up the mountain, when God has so much more for them.

Paul had this same concern for the young church in Thessalonica. After being with them for only a few weeks, persecution drove him away.

A few months later, Paul’s concern stirred him to send Timothy to Thessalonica to encourage and strengthen them and to check up on how they were doing.

When Timothy reported to Paul that they were doing well, Paul was encouraged and wrote the book of 1 Thessalonians to encourage them to not settle in their faith. The key verse is 1 Thessalonians 4:1:

“Finally, brothers, we instructed you how to live in order to please God, as in fact you are living. Now we ask you and urge you in the Lord Jesus to do this more and more.”

While Paul was encouraged by how far they had climbed, he recognized that many start well, but few continue to their potential.

The same is true for men and women as they begin to grow in their faith throughout college. Many will settle for mediocrity when God has so much more for them.

What is the difference between mediocrity and those students who climb for “more”? 1 Thessalonians gives us at least four of them.

They climb with great people.

People who climb (and summit) Mount Everest don’t climb alone. They climb with teams and on many of those teams are the Sherpa, native people who know the terrain and are uniquely adapted to the difficult environment.

As Paul wrote to the Thessalonians, he repeated the role others had in their lives.

Without others committed to climb and help them , Paul feared the Thessalonians could settle. We need these kind of people in our lives as well!

During my college years I was fortunate to have several men and a mentor who were committed to keep climbing for “more” and who loved me too much to let me settle for mediocrity.

Of all of the young men and women whom I have observed in their college years and beyond, there is a strong correlation between those who keep climbing and who they spend time with.

They climb with great energy

Climbing Mount Everest takes an enormous amount of energy. While it takes a day to climb a fourteener in Colorado, Everest takes six to nine weeks.

Additionally, Mount Everest climbers burn between 6000-8000 calories per day and lose 15-25 pounds over the course of the climb!

The same is true of our pursuit of Christ and His mission. It takes a supernatural strength that we don’t possess to keep climbing. Where does this energy come from?

A couple of things to observe from what Paul says in 1 Thessalonians:

1 Thessalonians 5:23-24 – “May God himself, the God of peace, sanctify you through and through. May your whole spirit, soul and body be kept blameless at the coming of our Lord Jesus Christ. The one who calls you is faithful and he will do it.”

Paul prays for God’s sanctification in the lives of the Thessalonians. He declares that God is faithful to do this. The energy needed to keep climbing comes from God Himself! God will not call us to something and not provide the energy to obey.

Paul describes their receptivity to the Scriptures as a process where the word is “at work” in those who believe.

The word for “at work” in Greek is energeo which means to be operative, to be at work, to put forth power. The energy needed to keep climbing comes from knowing and believing God’s word in the Scriptures.

While we often think of God’s word as mere direction, that is only part of the picture. It is also the source of power and energy to keep pressing on and climbing to know Him and make Him known. The Scriptures are both the GPS that gives us direction and the fuel that empowers us.

Therefore, this elevates the spiritual disciplines and in particular, daily meditation on the Word. This is crucial if we want to keep climbing for more and not settle.

It’s not just greater knowledge that should motivate us to daily time alone with God, but also a daily dependence for his strength that can only be found in knowing, believing and applying the Scriptures.

They climb with great perseverance

It has been said that climbing Mount Everest is the most challenging accomplishment on earth.

It’s hard. It takes great perseverance to not settle and quit during the climb. The further you go, the harder it gets. The obstacles get greater. The slope gets steeper. The wind gets stronger. The cold gets colder. The air gets thinner. Few climb to the top.

The section on the mountain, called Camp 4, is at an altitude of 26,000 feet and is often called the “death zone” due to the number of people who have died (and even remain) along the path to the top.

Although the path is intimidating, to keep climbing requires great perseverance.

Paul knew this would be the case if the Thessalonians were to keep climbing in their faith. There were many trials that they had already experienced, and many more to come.

This is true for us walking with God on campus.

It take perseverance to:

Climbing for more is tough.

Sir Edmund Hillary was the first person to summit Mount Everest in 1953. Afterwards he was asked what he thought the key to his success was. He stated,

“I have very modest abilities. Academically I was very modest. Mediocre perhaps, and I think perhaps physically I did not have a great athletic sense… But, I think maybe the only thing in which I was less than modest was in motivation. I really wanted very strongly to do many of these things and once I started I didn’t give up all that easily.”

What was the key to his climbing to the summit? Not his intelligence nor his athleticism. Rather it was his commitment to persevere.

When asked how he climbed Mt. Everest, he replied “with the first step!”

The same is true for us in our faith. Those who keep climbing never regret it. Those who settle for mediocrity always do.

They climb with great hope

Biblically, hope is defined as “a confident expectation of what is to come.”

Paul’s continual reminder is not an accident. It is as if Paul is encouraging the Thessalonians by saying “Keep climbing because Jesus is going to come back, and on that day, all of the climbing for more will be worth it!”

It is powerful to know that we will be with Him forever (1 Thess. 4:17) and that a day will come when we will realize that it was all worth it. We will see all the promises fulfilled!

As you seek to climb for more on your campus, realize that there is a great hope that God has for you! He has called you into His kingdom to live lives worthy of Him (1 Thess. 2:13).

What is waiting at the summit for you and I is the fullness of God’s presence.

At the end of the day, He is our hope and the person whom we should most desire.

This hope is for the residence halls, athletic teams, Greek houses, and all students on campus.

Wherever God has placed you as His ambassador, He has a great hope! God wants His Gospel to ring out (1 Thess. 1:8) through you to bring this hope to those who are without hope and without Him in this world (Ephesians 2:12).

Around the year, 1800 William Carey, Joshua Marshman, and William Ward became some of the first modern missionaries to launch into some of the world’s most unreached people when they went to Calcutta, India.

These men, along with others, refused to settle for mediocrity and, at the risk and expense of their lives, took the hope of the Gospel to the millions of people in India.

For the remainder of their lives (as well as their wives’ and many of their children’s), they climbed for more, refusing to settle for the mediocrity that many of their peers in England were entrenched in.

In Serampore, India, you can find each of their graves. On Carey’s you will find the simple inscription, “A wretched, poor and helpless worm, on Thy kind arms I fall.”

In that epitaph lies the greatness of this hope.

After a lifetime of climbing, they found themselves at the top of the mountain. Awaiting them was the embrace of the One whom they had climbed with for so many years. Upon reaching the summit, they simply fell into the kind arms of their first love and heard the words, “Well done.”

Why settle for mediocrity when we can climb for more?

What is your plan for daily meditation on and application of the Scriptures?

What are the obstacles that you must persevere through on campus in order to not settle?

Who are some people that you can climb with?

What is your hope as you walk with God and labor on your campus?