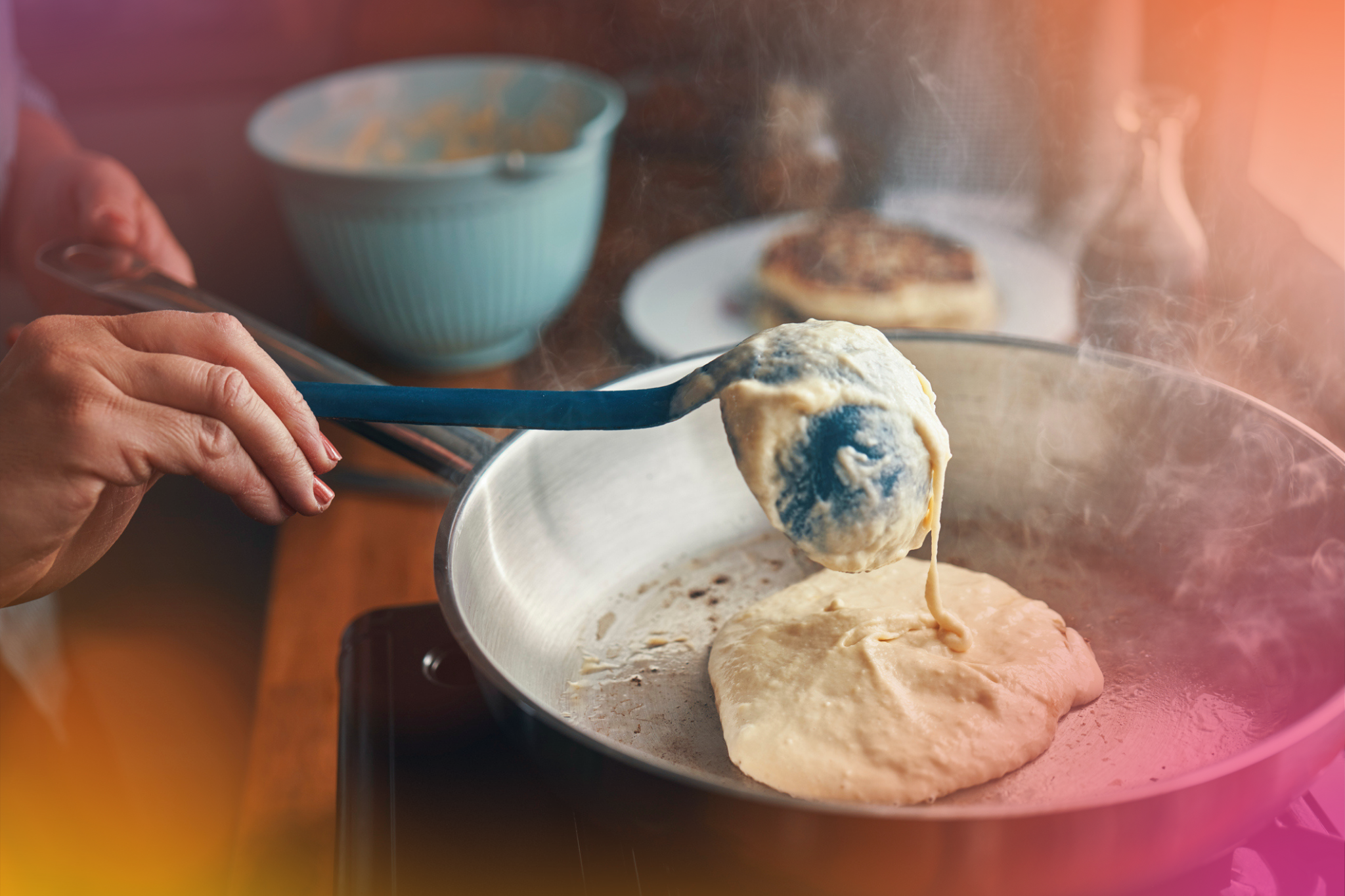 Pancakes With A Purpose

Some time ago, a few of our students went down to UC Santa Barbara and came back raving about an outreach they saw called Jesus Burgers. Every Friday night they give away around 200 free hamburgers and minister to people in the name of Jesus.

They wanted to do this at Stanford, so they went to the student activities office to see what kind of permission they would need. It turns out all the permissions: we would need a county food-service permit and a county-certified chef. The university wasn’t trying to stop the spread of the gospel, they just wanted to prevent the spread of salmonella!

So we began to pray and to think about it. Eventually, someone suggested that we ask about using some of those “just add water” pancake mixes and some electric griddles. The student activities people said that sounded fine, and Midnight Pancakes was born.

– Find a place between the dorms and the party scene on the weekends. Set up several griddles, whip up some pancake mix, and get ready. We usually set up around 10 p.m. on a Friday and go until about 2 a.m..

-Make pancakes for the crew that is serving. Don’t muzzle the ox while they are treading the grain! Also, it’s free advertising for what is happening.

-Hang up a sign that says “FREE PANCAKES” and start blasting some upbeat Christian music.

-DO NOT MAKE PANCAKES IN ADVANCE. This is not a fast food restaurant, this is a ministry where spending time with people is the goal.

-As people approach, ask them what they’d like mixed into their pancakes. We keep stuff like chocolate chips, marshmallows, etc. on hand. We also have syrup, nutella, and peanut butter as toppers.

-This customization part is key—they have to give you their order and then they hang around while someone prepares their food to their specifications.

-This is where your students start chatting them up. Invariably people ask “Why are you giving away free pancakes?” And the students offer some version of “We’re a bunch of Christians trying to show people God’s love in a practical way.” And then it’s a natural follow-up to ask, “Were you raised in any sort of religious environment? How’s that going for you?”

-And when the server hands them the prepared pancakes they say, “Here you go! Is there anything I can pray for you about?”

-It’s not complicated. It doesn’t require a lot of training. And it reaches a lot of people.

-It gives students struggling with the party lifestyle an alternative use of their time.

-It outs students as Christians to their friends.

-It helps people who are apprehensive about talking about their faith by giving them a natural pretext for conversation. They can learn how to have these conversations in a structured setting and then take those skills into their personal dorm and dining hall interactions.

A small testimony: some people from a nearby church were ministering in San Francisco and struck up a conversation with a couple. They were struggling to make a connection and then they asked, “Have you ever had a positive interaction with a Christian?” And these two said, “Actually, there was this one time at Stanford that some Christians gave us some pancakes and prayed for us. That was pretty cool.” And they said, “We’re that kind of Christian” and had a fruitful conversation.

May that testimony be multiplied many times on your campus and beyond!